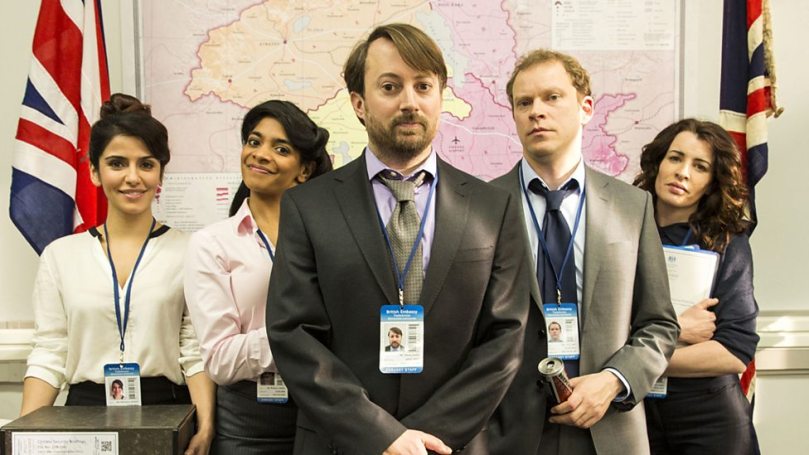 In 2013, arguably Mitchell and Webb’s most daring project debuted: Ambassadors was a show unlike anything they had previously embarked on. A comedy, a drama and a thriller all set in the fictional Eastern block state of Tazbekistan.

The story began shortly after Keith Davis (David Mitchell) had been appointed Tazbekistan’s new Ambassador, following the mysterious disappearance of the previous one. He attempts to fit in but accidentally shoots an Ibex (Tazbek’s national animal) on a hunting trip with the president. Keith’s attempts to impress are appearing increasingly bumbling to his second in command Neil Tilly (Robert Webb) who has a mysterious past of his own. A mysterious man appears to be blackmailing him and he has a particualy rebellious girlfriend who he’s keen to keep on the quiet – Tanya ( Natalia Tena). Keith and Neil both answer to POD (Matthew McFadden) their superior in the Foreign Office, whose video calls from London they both dread and rarely come off well from. 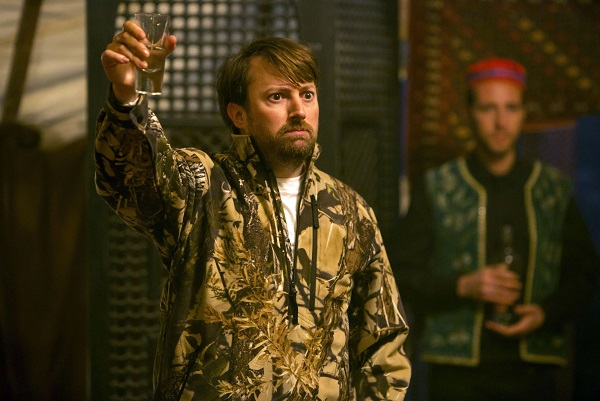 Ambassadors satirised the difficulty of being an Ambassador in a country which is essentially is a dictatorship – although for the most part ‘The Prez’ manages to be as amusing as he is threatening.  The first thing that you notice about the show is that it looks and sounds like a movie. Shot partly in Turkey, and partly in the UK (although you’d never know it). The look of the show is flawless and probably one of the best looking comedies ever made. Written by James Wood (who had previously written Rev) and also Rupert Walters, it was Mitchell and Webb’s debut as co-executive producers. The attention to detail was one of the best things about Ambassadors. On the BBC website you can read a page all about the history of Tazbekistan  – the entirely fictional country created for the show: https://www.bbc.co.uk/programmes/articles/4950cyLdDC4TgG5bkzQm9GL/tazbekistan

One of the great things about Mitchell and Webb is their ability to span genres. You’d be very hard pressed to find a double act with a more eclectic range of comedy on their CV’s/IMDB pages. Ambassadors was their first project to pitch itself as a serious comedy drama (if that’s not a contradiction in terms) and it delivered. Split into three hour long episodes rather than the usual six half hour shows. The finale packed a particularly exciting punch, when a ‘Tazbek Spring’ occurred and Keith decided to take matters into his own hands and meet with the terrorist Tazbek rebels in a move that could threaten his life.

Just because Ambassadors delved into drama, that didn’t mean it wasn’t short on laughs. Tom Hollander’s rather obvious parody of Prince Andrew, complete with a six-foot ironing board, and his attempts to interact with the staff were hilarious. His friendship with ‘The Prez’ over The Last of The Summer Wine being a particular highlight. Another great on-going gag was Keith’s continual annoyance and games of one-upmanship with the French Ambassador. A feature that also absolutely made the show was the almost ‘Statler and Waldorf’ style comments from two spies for the state, who bugged and monitored the Embassy at all times. But, my favourite moment of all was a serious one – Keith’s ‘one of those moments’ speech really resonated with me.

So why didn’t we see any more episodes of Ambassadors? Well, it’s certainly an extraordinary story. The BBC eventually had to deny that there was any Government collusion in axing the show. Ambassadors was received very well, and was even repeated over the Christmas week of 2013, but after that things went quiet. It wasn’t until over a year later, when bizarrely, former Tory MP, Matthew Parris, broke the news that the show wouldn’t be getting a second series. Here is the excerpt reporting on this story from The Evening Standard:

“The episode involving a fictional minor royal (obviously Prince Andrew) furious that there was no Four Seasons hotel for him to stay in was hilarious,” he writes, adding that his fondness for the programme was shared by the Prime Minister and several British diplomats. The Duke of York, however, is not a fan, and Parris claims Foreign Office pressures may have led William Hague to ban staff from tweeting about it when he was Foreign Secretary.

“Now I hear the BBC is getting cold feet about a second series,” Parris writes. “Next time some ghastly foreign despot objects to something else in our media, the BBC (and the FCO) will struggle to insist that in a democracy the government does not control these things.”

The BBC confirmed Ambassadors won’t be back but insists that it was its decision alone. “In fact, the Foreign Office was a big supporter of the series throughout development and production and, we are led to believe, the final show had many fans in government. If the BBC was afraid to offend government departments, shows such as The Thick of It, Have I Got News for You or anything with Charlie Brooker in it would never make it on screen.””

It’s a deeply unsatisfactory end to what was an amazing show. The worst thing about it was how the first series had set up so many teasers for things to come. We’ll almost certainly never discover Neil’s secret, what happened to the previous Ambassador, or what the golf balls that were found sinisterly lying around the embassy were all about. But there is a silver lining to this particular dark cloud, and that’s Back – arguably Ambassador’s true spiritual successor. Robert Webb’s character, Andrew, in particular, is very similar to Neil, a furtive character, who you’re never quite sure you can trust. In the first episode of Back, we see Andrew being driven through an atmospherically lit tunnel – Ambassadors was all I could think of.