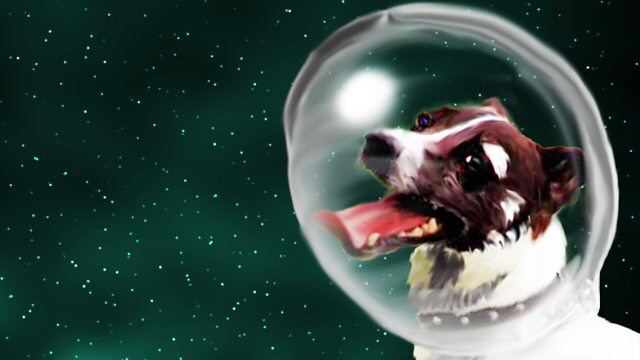 After a couple of years away, Time Spanner returns. Written by Simon Kane and produced by Gareth Edwards (two legends of the Mitchell and Webb gang ). For those that missed the first episode, Martin Gaye (Simon Kane), a slightly neurotic forty-year-old, fell in love with Gabby Hayes (London Hughes) a bubbly twenty-year-old charity worker who he’d just met that morning.

Unfortunately, Martin’s attempts to woo her were interrupted when his boss, the titan of self storage: Daniel Kracken (David Mitchell) sends him through a scrying glass (a mirror to communicate with angels) in order to ask a question about bringing back the dead.

On the other side, Martin meets an angel who invites him on a quest to steal a magical object known as the Time Spanner, in order to save the universe!

Meanwhile, all this action is narrated by the dead space dog Liaka (John Finnemore).

And now as we return, Martin Gaye travels with Gabby in tow to the weird world of Vauxhall in 2018, where Daniel Cracken has taken over the world-or so it seems…

It’s been a while since the first episode, however, it doesn’t feel like it, (although there is a casting change as Sally Phillips now plays the angel ). It is an episode that’s just as good as the first…if not better! Without spoiling it, my absolute favourite part was when Martin and Gabby travel to the ‘dystopian’ 2018 run by Daniel Cracken (now with a cape).

Of course it’s always great to see/hear David Mitchell. I think you can probably guess that I would feel like that, judging by where you are on the internet right now!But it’s interesting to see him play a villain, which we never normally see/hear…and a very funny one he makes too.

John Finnemore also plays an excellent enthusiastic dead space dog, and I really like Gabby and Martin’s very cute chemistry. London is brilliant as the overzealous Gabby and Simon great as the likeable but easily lead Martin.

Time Spanner’s mix of comedic talent, with the peppering of daft and poignant plot points leads to a very obvious comparison to The Hitchhikers Guide to the galaxy! Although a lot of people remember it as a TV series, or a film, or a book, or a radio series, and get seriously muddled about which came first… it was at its core a radio series, and I really think that if Time Spanner had a full series it would fill the Hitchhiker’s void.

The Sifi comedy sitcom is in such short supply, but when the BBC gets it right we end up with some classics. I believe this will be the case with Time Spanner, and I really hope we hear more in the future. I’ll have to dig the Time Spanner out of my nose to see if I’m right!