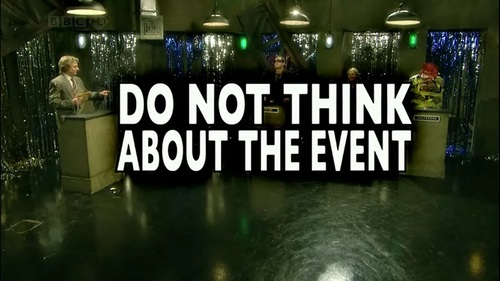 For obvious reasons the ‘Remain Indoors’ sketches, also known as ‘The Quiz Broadcast’ although officially known as ‘After the Event’ are everywhere. The memes and clips relating to the sketch have been piling up on social media. So, the writing team behind the sketches (David Mitchell, Jonathan Dryden Taylor, Joel Morris and Jason Hazeley) teamed up to chat about The Quiz Broadcast and its recent resurgence on The Rule of Three Podcast this week. I thought it might be interesting to have a look at some of the insights revealed and explore the interesting origins of The Event…

During the podcast, a chance visit to the Kelvedon Hatch R4 Bunker in Essex (which is now open to the public… or used to be) was mentioned as the direct inspiration for The Quiz Broadcast. This bunker was a part of the BBC’s plans for broadcasting in the event of a nuclear war, once a real threat during the 1980’s. The BBC documents which were referred to as ‘The War Book’ revealed miraculously detailed plans for ‘The Wartime Broadcasting System’ or WTBS, the broadcasts would have been operated across eleven secret bunkers across the UK. You can read more about these astonishing plans here: https://www.bbc.co.uk/news/magazine-36865345

By far the most fascinating and probably also the direct inspiration for the now infamous catchphrase ‘Remain Indoors’ were the emergency recordings created for the BBC’s Wartime Broadcasting System. Peter Donaldson, a well-respected voice of Radio 4, recorded a series of announcements to be played in the event of such an emergency. A freedom of information act revealed the full transcripts for all of these announcements back in 2008 and a few of the original recordings were released. One of the clips were as follows:

“This is the Wartime Broadcasting Service. This country has been attacked with nuclear weapons. Communications have been severely disrupted, and the number of casualties and the extent of the damage are not yet known. We shall bring you further information as soon as possible. Meanwhile, stay tuned to this wavelength, stay calm and stay in your own homes.”

There were also plans to broadcast classic comedies, copies of Round The Horne, I’m Sorry, I Haven’t A Clue, and Hancock’s Half Hour were kept in the bunkers for broadcasting until it was eventually theorised that this would be a terrible waste of radio batteries in the event of an actual disaster.

But the idea of this optimism and the BBC’s quest to plough on regardless with making (or at least repeating) classic comedy and entertainment shows in the face of almost total annihilation was so darkly humorous that some of the Mitchell & Webb writing team set about writing the ‘After the Event’ sketches. They were so keen that both the writing duos of David Mitchell and Jonathon Dryden Taylor, and Jason Hazeley and Joel Morris unwittingly worked on different versions of the same sketches, which then had to be stitched together – that’s apparently why The Quiz Broadcast has two endings. The first ending was the zombie ending ‘They’ve got in’ and the second was the more tragic ‘Let’s Stand Together’ which became the final ending.

Fast forward many years after That Mitchell and Webb Look had come to an end, and as the Brexit saga rolled on and on ‘The Event’ sketches started to resurface, as many ‘no-deal’ gags were enjoyed in the face of all the unease and casual stock piling. But now, with the global Coronavirus crisis and subsequent lock down ‘The Event’, and in particular the phrase ‘Remain Indoors’ is all too real…It’s being posted everywhere on Twitter. Watching TV last week, I couldn’t help but be constantly reminded of it. Before Coronation Street, a continuity announcer reminded us about social distancing and told us to adhere to Government guidelines,’ stopping just short of adding ‘Remain indoors’. Meanwhile two flagship shows of Channel 4 and ITV, The Last Leg and Ant and Dec’s Saturday Night Takeaway, had to limp glibly on without a studio audience, performing to, and around a plethora of empty seats. I mean no disrespect to these shows that carried on well in the face of adversity, but there’s something eerie about an empty TV studio, seeing Ant and Dec running around paying tag in amongst deserted rows of chairs, and a teary Adam Hills tell us that he’d ‘see us on the other side.’… well, let’s just say that I think The Quiz Broadcast missed a trick by not including a sea of empty seats.

Now, for all its genius, The Quiz Broadcast might almost feel a bit too dark these days and too close to home in these terrible circumstances. Reflecting on one gag in particular – the slight chuckle made by the host as he reminisces ‘Oh yes, post event the world would have been a different place if we’d managed to keep even some of the children alive,’ David remarked, ‘it just makes me shiver; it doesn’t amuse me anymore. I wish it wasn’t there.’.

The Quiz Broadcast was an unusual series of sketches in that they mixed dark comedy with genuine poignancy. The League of Gentleman is a great example of a show that was an absolute dab hand at the blackest humour in all of comedy, the iconic line: ‘We didn’t burn him!’ was a perfect example of this. However, the characters were grotesque and we weren’t supposed to like them (okay, except maybe Micky). But, The Quiz Broadcast characters were likable, the genuine sadness you feel for them makes the humour even darker. Foolishly we hoped that the unnamed host, Peter and Sheila would somehow make it.

I find black comedy and poignant moments in comedy series endlessly interesting because they do seem to have an extra weight to them, a depth of sadness that most drama series can’t achieve. Take the ending of Blackadder Goes Forth for example, or the ending of That Mitchell and Webb look or more recently that show stopping death of Hamnet in Upstart Crow. Admit it, you’ve cried at all of them!

So, in summary, the series of ‘After the Event’ sketches are classics with a fascinating history, but they might be a better watch when this Covid19 nightmare is all over. Until the next time, remain indoors, no really, do remain indoors and you can listen to the rule of three podcast here: https://play.acast.com/s/ruleofthree/cb392fe6-93bf-4399-9100-cfd4d7775424